"Chuanyang" is the common name of the silver coin with the pattern of ocean sailboat, which was made by the national government in the 1930s. In 1933, the KMT Nanjing government decided to abandon the gold standard monetary system, determined the silver standard currency system, and stipulated Sun Xiang's double sail sailboat silver coin as the national currency. In the twenty-two and twenty-three years, Shanghai Central Mint began to issue this coin. Among thousands of old silver coins issued in modern China, the influence of Chuanyang silver coin was second only to yuan Datou silver coin. 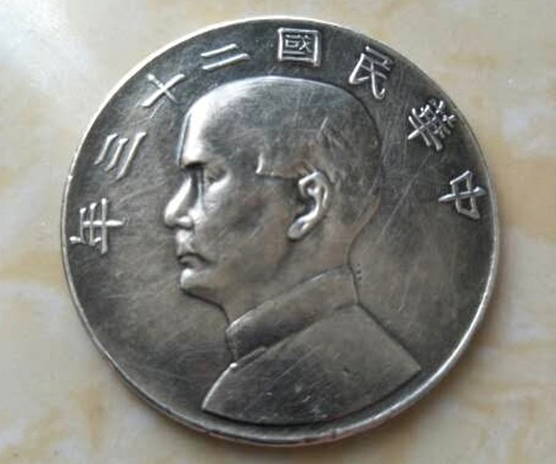 At the beginning of 1929, the Ministry of Finance invited foreigners to design new coins. Later, the mint companies of the United States, Japan, Britain, Italy and Austria tried to make a batch of Sun Yat Sen's profile coins according to the same sketch, and a small number of samples were cast in Hangzhou. In 1932, the Nanjing government issued a small number of silver coins of the Sun Yat sen in 1932. The front of the coin is a profile of Sun Yat Sen, and the back is a picture of the sailing boat. There is a beam of sunlight in front of the bow, and there are three flying birds on the sky. It means "national fortune", "smooth sailing" and "rising sun in the East". However, after the outbreak of the September 18th Incident, the Anti Japanese climax rose in the whole country. People had different opinions on the back of "Chuanyang". They thought that the image of the three birds was like a Japanese plane, and the sun was like a sun flag, so they took it back and recast it. 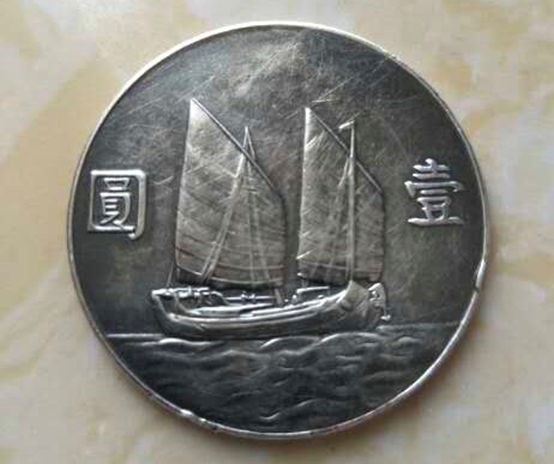 In March of the 22nd year of the Republic of China (1933), the national government officially "changed the two fees into yuan". The Ministry of finance of the Kuomintang government promulgated the "order of abolishing the two to change the yuan" and the "silver standard casting regulations". It was decided to end the situation of dividing the silver coins into silver coins in each province. It was decided that the minting right of silver coins should be transferred to the Central Mint in Shanghai The receipt and payment of private money must be changed into silver currency instead of silver. In the same year, a new type of silver coin, Chuanyang, began to be minted at Shanghai Central Mint. The new design, Sun Yat Sen's head on the front, and the "boat ocean" with double sails on the back, is the official national currency.

This "sailboat coin of one yuan silver coin of the year of the Republic of China" was cast by Shanghai Central Mint in the year of the Republic of China. Sun Yat Sen's profile head is engraved on the front, and "the 23rd year of the Republic of China" is engraved on the front, and the double masted sailboat is sailing through the wind and waves on the back, with the currency value of "one yuan" on the left and right. In terms of coin design, shuangfan coin is the source of wisdom and unique aesthetic perspective of thousands of craftsmen. It has excellent appearance, harmonious overall shape and exquisite design. In addition, the two sails are very rare. Through the contrast and refraction of light, the silver mottled ancient "Baojiang" still permeates the coin, which is a natural "track of time", In the market is relatively rare, so it also attracted thousands of collectors to collect, which shows its value status.

Because it was made of precious metal, the quantity of "Chuanyang" was much less than that of copper yuan and paper money. In addition, due to the social unrest during the period of the Republic of China, silver yuan was mainly concentrated in the hands of a small number of officials and merchants. Due to the large amount of exchange after liberation, there was little left in the world, much less than the amount of stamps and commemorative coins currently issued. It can be predicted that "Chuanyang" silver dollar will become a black horse in the collection industry.